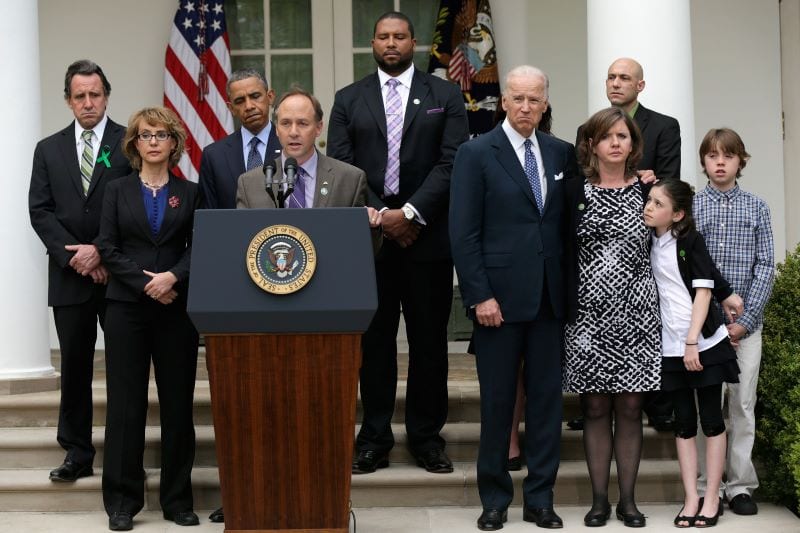 April 17 marks nine years since the Senate struck down the background checks bill. It was a bill we put everything we had into getting passed during those incredibly difficult months after our loved ones were murdered at Sandy Hook Elementary.

“In April of 2013, I had the honor of introducing President Obama in the Rose Garden,” said Mark Barden, Sandy Hook Promise co-founder and managing director (pictured at the podium). Unfortunately, it was to announce that a bill that had been proposed to close the loophole in the existing federal background check system for firearms sales had been blocked by some members of congress. I remember standing there with my family and Vice President Biden, listening to our president speak and our feelings of despair were replaced with hope.”

Now that hope has re-emerged after the House passed a new background checks bill. We have our best chance since 2013 to finally succeed – so we need to continue putting overwhelming pressure on the Senate to act immediately.

In the wake of the Sandy Hook Elementary School tragedy, Sandy Hook Promise worked tirelessly with federal lawmakers and the administration to require Background Checks for firearm sales and make meaningful improvements to keep children safe from gun violence.

Despite our best efforts — and the support of more than 97% of Americans  — the legislation failed to pass the U.S. Senate. We’ve continued to fight every day since then, and now, eight years later, we see a path forward.

The Biden-Harris administration has an opportunity to build upon this work. With bipartisan congressional support, they have an opportunity to create a safer nation for generations to come. The U.S. Congress has re-introduced Background Check legislation, and we are ready to help get it across the finish line. Learn more about raising awareness about this life-saving legislation.

The Time is Now

The time for reforms has never been more urgent. Gun violence has become the second leading cause of death for youth in our country. And teenagers nationwide, particularly in the wake of recent violence, have been stepping up and calling for more reform efforts. Teenagers are seeing their classmates die in the streets or take their own lives. And it’s time we start listening to what they have to say.

“It’s frustrating that our ‘leaders’ can’t come together, despite their disagreements, to find a solution to the violence that’s plaguing our country,” said Lena, a resident of Parkland, Florida who serves on our National Youth Advisory Board. “I want to see them find common ground, establish their goals and work for the welfare of all Americans.”

“I am hopeful that after lawmakers have experienced a lockdown, they will realize how pressing the threat of violence is in our society and how traumatizing it is for children to live with the effects of gun violence.”

There is no single law that can put an end to mass shootings or gun violence. But there are proactive steps we can and must take now to ensure our children and communities are safe. Background Checks are crucial to keep guns out of the hands of prohibited buyers.

By expanding background checks, we can help keep firearms away from individuals deemed a threat to themselves or others. It’s been a long road to get here — more than eight years. But we’re ready to work with the new Congress and Administration. Together, we can finally get Background Checks signed into law.