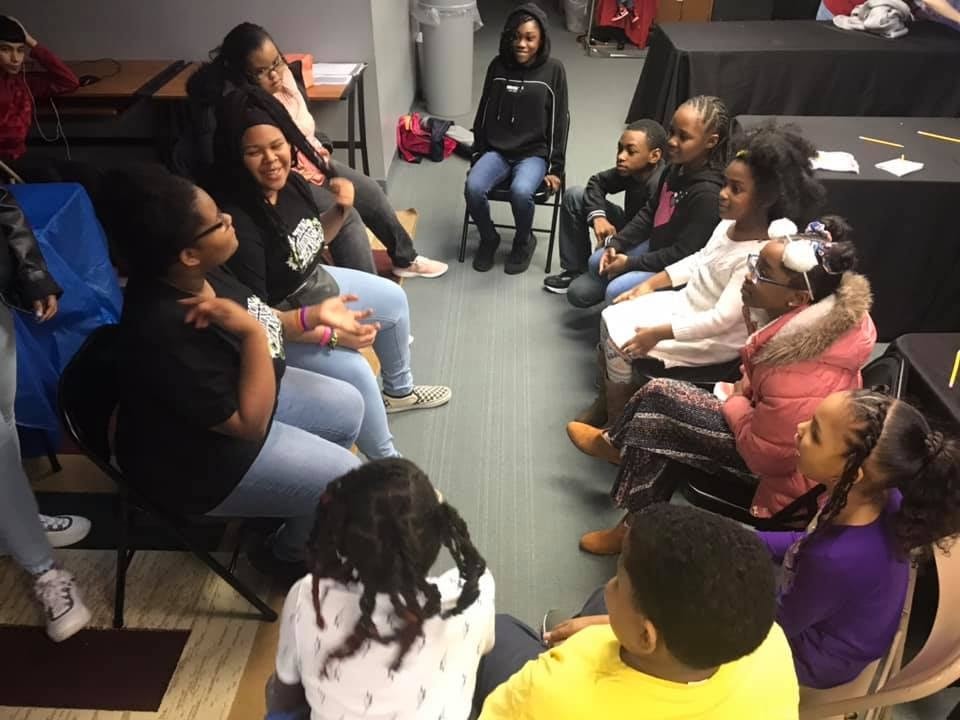 Arriana, our featured guest blogger, is a high school student from Georgia and a member of the Sandy Hook Promise Advisory Board. Pictured above, she speaks with younger students in her community about violence prevention efforts. Please read and share her moving post.

When I was just five years old, I remember lying down in my bed at night, listening to the loud cursing of couples through walls, followed by police siren wails and women and children being rushed out into the chilly night air. This was a common and almost expected event among the apartment complex. It was normal.

But then it grew worse, and people were getting killed.

During my freshman year, an innocent high school boy was murdered who left behind an orphaned little sister. That same year, a ninth-grade student killed himself.  We were all in shock and our teacher was in tears.  We tried to console her, but she truly had loved the boy as her own and her tears punctuated our own pain.

In the face of such adversity, I realized it's easy to be violent, angry, and vengeful. But it takes strength, self-control, and experience to choose otherwise. I choose to instead help others avoid being perpetrators and victims.

With National Youth Violence Prevention Week (March 30 - April 3) soon approaching, I want to urge everyone - students, parents, educators, and concerned citizens -  to get involved in making their schools and communities safer. With so many schools being canceled the potential for students to feel isolated or depressed has only increased. Learn the warning signs and when to reach out to a trusted adult.

I’ve found that community-based outreach, encouraging violence prevention programs, and being passionate and confident enough to use your voice to demand change are all great ways to prevent youth violence.  Having grown up around violence, it’s so rewarding to see the huge impact we can make. It’s not easy, but with the alarming increase of school shootings in our country, it has to be done.

My first experiences with youth violence prevention came from talking with other kids at after-school programs through the activities and events of my SAVE Promise Club. We learned how to speak up for ourselves and others with Say Something Week, how to approach others who are socially isolated and “start with hello,” and how to be young change-makers in our community. Meeting new people and hearing their stories about experiencing violence set me on fire to do more to ensure it didn’t happen to anyone else.

Sometimes outreach can be as simple as talking to someone.

Shortly after the August shootings in El Paso and Midland-Odessa, I sat next to an activist from Texas at an organizing event.  She began telling me her story, then asked about mine. I told her about how I got involved with organizations like Sandy Hook Promise, and about using my passion for writing and music to further my cause of creating a world where people can feel safe and not being victims of a bullet, bullying, or suicide. Where kids like me don’t have to see violence as the norm, as I once did.

It was then that I realized she was crying. Through her tears, she told me that I gave her hope. Hope that tragedies like those in Texas would never happen again. It’s a moment I will never forget.

This is why I encourage everybody to support opportunities to connect with others about gun violence prevention. School-based programs like Say Something, Start With Hello and SAVE Promise Clubs are so important. Not only do they strengthen the leaders of tomorrow, but, on a community level, they help us all be vigilant for warning signs that precede potential violence and act immediately to prevent tragedy. And truly, I believe that’s where many big changes start: the smallest groups of people working at the community level.

National  Youth Violence Prevention week starts on March 30. I urge everyone to take part and  do something in their own communities. With so many students home from school, it's more important now than ever to watch for the warning signs and reach out if someone needs help.

Our voices may be tired, but we pick up a cup of hot tea with honey and keep ongoing. We are the change, we are the future, and we are never going to stop.