Promise Leaders are Bringing Change to Their Communities

A Promise Leader is a committed supporter of Sandy Hook Promise's mission and approach who is willing to go beyond activity at the individual level and bring Sandy Hook Promise programs and initiatives to a larger audience within their community.

Examples of Promise Leaders at work in their communities include: 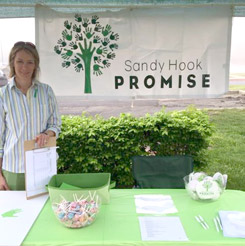 Shannon (Street, Maryland) hosted a Sandy Hook Promise information table at the annual PTA Spring Fair at her children's elementary school. Nearly all of the people who attended the fair were families of young children in her rural community, so it was the perfect opportunity to talk about Sandy Hook Promise's programs and the importance of not just talking about the gun, but the reasons why someone picks up a gun to hurt themselves or someone else.

Mark (Dayton, Ohio) runs an after school program for disadvantaged youth at his church. Over 50 youth attend the after school program from 12 different schools. Mark has implemented Start With Hello (formally No One Eats Alone) to teach young people how to reduce social isolation and foster community within their schools and neighborhood. Mark has recently signed up to bring Sandy Hook Promise's Say Something program to his youth group as part of Say Something Week in October.

Bonita and Norman (South Setauket, New York) are new Promise Leaders and passionate about mental health and wellness and gun violence prevention after losing their son to gun violence. While they are retirees, they didn't let that stop them and are working with fellow Promise Leaders Holly and Joyce to introduce Sandy Hook Promise's programs to schools in their community. They have reached out and invited leaders from 14 local schools to attend a meeting at their retirement community when they plan to show Nicole Hockley's Ted Talk and share information about how schools can implement Start With Hello, Say Something and Youth Mental Health First Aid. 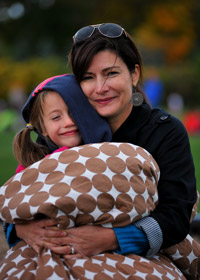 Nikki (Worthington, Ohio) hosted a Sandy Hook Promise Open House at a local wine bistro in her neighborhood earlier this summer. She chose an open house format because she knew that within her circle of friends, neighbors and colleagues she already had an audience that would be interested in Sandy Hook Promise, its mission and its programs – all she needed was to create an excuse for her network to get together and talk. At the event itself, Nikki broke the evening up into 30-minute segments. At the beginning of each segment, she spoke about Sandy Hook Promise programs that address Mental Wellness Early Identification & Intervention and our Keep it Safe and Secure firearm guidelines.

Kathleen (Lorain, Ohio) was concerned about the growing number of young people in her community completing suicide. She brought together representatives from 12 different organizations, including schools, law enforcement, nonprofit and faith communities to discuss what they could do. Each of the 13 people around the table committed to bringing 10 people to a community forum where they played Sandy Hook Promise's 'What They Left Behind' documentary and shared information about Say Something. Over 300 people attended the forum and left with information about how to talk to young people in their lives about the importance of Say Something.

Promise Leaders contribute to Sandy Hook Promise's mission in two ways: By implementing a Sandy Hook Promise program, such as Say Something, Start With Hello or Youth Mental Health First Aid, within their community or by organizing an awareness building activity, such as managing a table at a community event, starting an online campaign or organizing a documentary viewing event in their community at least once per calendar year.

Click here to sign up as a Promise Leader and help protect children from gun violence in your community.