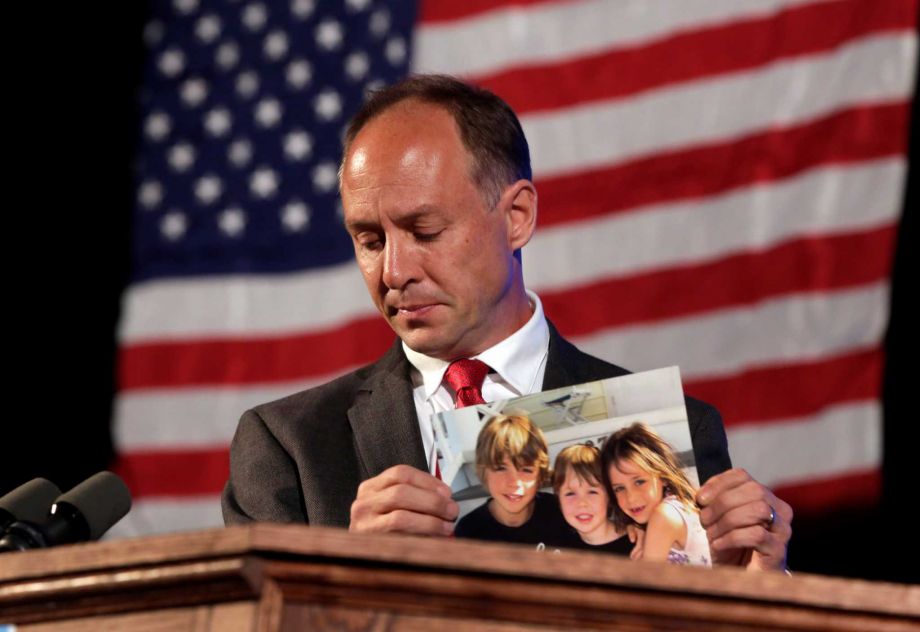 My name is Mark Barden, a little over three years ago I was a professional musician, husband and father enjoying a simple, happy family life. My wife Jackie grew up in the Bronx and put herself through school to pursue her passion which is teaching. We now live in Newtown CT. with our three beautiful children; James, Natalie and Daniel.

Daniel was our youngest and an absolute light of happiness and joy. Daniel’s sense of awareness, empathy and tenderness transcended his seven years in a way that prompted many to refer to him as an old soul. In school, Daniel earned the reputation as the sweet, little boy who would ask to sit with someone who was sitting alone or having a bad day. In fact, the parents of some of Daniel’s kindergarten classmates requested that their children were placed with Daniel again in first grade. At home Daniel was a bastion of ethics and respect, for instance, at dinnertime he would scold James and Natalie if they tried to pick at their food before Jackie and I were seated, and he also insisted that we offer a prayer of gratitude before we enjoyed our meal.

I apologize if I sound like a braggy parent, but I feel it is important, especially in this context, that you take a moment to consider the humanity and the personal impact of what has been taken from us and what is at stake here.

My family had what we all considered an idyllic existence and an ideal life.

And it all changed on the morning of December 14th 2012. When a gunman wielding an AR-15 semi-automatic assault rifle, equipped with 30 round magazines, shot his way into Sandy Hook Elementary school and shot and killed 6 educators and 20 first grade children. One of those children was my sweet, precious Daniel.

In an instant, the little boy who danced around our house, rescued worms from the sun and held doors for strangers - was gone forever. In the days and weeks following Daniel’s murder, like all of us, James and Natalie were left bewildered and heartbroken, with questions that Jackie and I were ill equipped to answer. Questions like “Why would somebody do this” “How could this happen?”

Through the course of research in the hopes of answering these questions, we have learned that over 30,000 people are killed as a result of gun related tragedies in the U.S every year, that’s 89 people, including 7 children. Every single day. Gun related fatalities are on track to exceed deaths by car accidents nationally, and already do in some states. This is unacceptable.

I have subsequently made it my life’s work to try to identify realistic, sustainable solutions and ultimately save other families from living this never ending pain.

I am now one of 3 managing directors of Sandy Hook Promise, a national nonprofit organization dedicated to bringing the numbers of gun related tragedies down through prevention programs. The bottom line here is that we as a nation, as Americans and as individual members of our families and communities - have to do better.

Shamefully, congress has done nothing to address this epidemic. Thankfully, President Obama is doing what he can within his authority as our elected leader - and as a father, to take meaningful steps toward protecting our nation’s children and making our communities safer.

The package of executive actions the President is offering will help enforce laws already on the books. Adding staff and resources to the existing background check system will facilitate a faster, more efficient transaction for law abiding citizens who wish to purchase firearms. Since many guns used in crimes have been stolen, reporting lost or stolen guns in transit will help minimize the number of firearms that end up in the hands of criminals through this pipeline. Applying better technology to make firearms safer will cut down gun tragedies across the board from stolen guns, accidental discharge by a child and suicide. The President has also proposed increased funding and resources be made available to bolster and improve our mental health care system. Access to quality mental health care is critical to early identification and treatment for individuals who may be on the path to hurt themselves or someone else.

I am before you today as an informed, proud American who knows these modest proposals will go a long way toward not only saving lives, but also improving quality of life. And I am before you today as a grieving father who knows firsthand the cost of inaction. I’m asking you to think of my sweet little Daniel and what was lost here…and the 90 American families who will lose a loved one today, and another 90 tomorrow…and so on every day until we do something.

President Obama is trying to do something, please help him.