The Promise of Innovation

At Sandy Hook Promise, we believe that saving lives and preventing tragedy is everyone's responsibility. We work with partners from every corner of American life to stem the tide of gun violence. Passing new laws alone will not solve the problems that face neighborhoods across the nation, which is why we have teamed up with leading technologists and venture capitalists of Silicon Valley to explore ways in which innovation can spur solutions to gun violence. 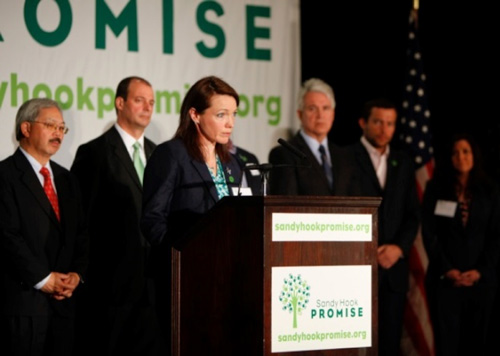 Nicole Hockley, mother of six-year-old Dylan who was killed at Sandy Hook, talks about the promise of innovation to end gun violence in San Francisco, California.

In March, we announced a partnership with the Technology Committee to Reduce Gun Violence, a group of over 40 of the nation's leading entrepreneurs who were inspired to make a difference after the tragedy of the Sandy Hook shooting. As the committee chairman Jim Pitkow says of their role in the national gun debate, "What technology can do is shift the debate from hypothetical to practical."

To that end, Sandy Hook Promise has announced a national "call for ideas," working with the Committee to find and fund promising innovations in gun safety, mental health research and related new technologies that will help to prevent gun tragedies.

To read more about the Technology Committee to Reduce Gun Violence, read this recent interview with Jim Pitkow about how the group was formed and the promising ways in which innovation can spur common sense solutions. Have an idea yourself? Learn more about the Innovation Initiative, to submit an idea and get involved.