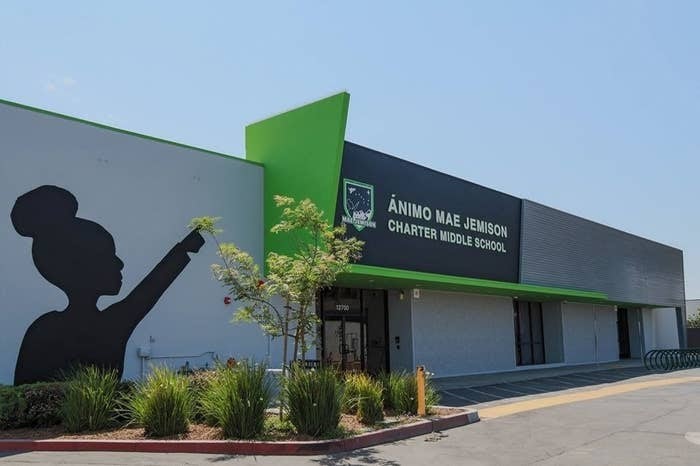 The school itself has become a refuge for students, while outside the walls lies an impoverished neighborhood where gang violence and homelessness are acute. One can’t drive through the neighborhood - where dozens were killed during race riots in the 1960’s - without seeing makeshift memorials hung from telephone poles where young men and women were murdered in more recent years.

Many of the students have become numb to violence.  But when several students trained in the Say Something program saw a 13-year-old classmate showing significant behavioral shifts and bragging about his plans, they knew it was time to act.

The students told a trusted adult, who immediately contacted the authorities. The student was found to be in possession of an AR-15, hundreds of rounds of ammunition, a map of the school and several hit lists of students and staff members that the teenager wanted to “give presents to.”

Students and administrators also found handwritten notes throughout the building warning about the threat, but nobody could tell who wrote them. It wasn’t until students spoke up about what they had heard that administrators and law enforcement sprang into action.

The student exhibited many of the signs discussed in the program, including significant behavioral changes, pulling away from his peers, outright bragging to other students and becoming increasingly protective of his belongings.

“There is no doubt that lives were saved that day,” said Angela Rodriguez, the school’s assistant principal.

The administrator credited the  training the students received in March along with a prolonged effort to create a culture of trusting relationships between adults and students at the school. Students who learned the signs already had a trusted adult they could turn to.

Animo Mae Jemison Charter School is located in the center of Watts -- home of the infamous race riots in 1965 that left 34 dead and more than a thousand injured -- and the Rodney King riots in 1992. Because of the history, trust is something that doesn't come easily to some in the community. It has to be earned.

“Students around here see school as just another government institution that failed them,”Rodriguez said. “As a result, we’ve done a lot of work to build strong relationships with our students and their parents.”

Several years ago the school instituted an advisory period at the start of the school day. Students stay with the same advisor throughout their three years at the school so that they can build a trusting relationship.

It was their advisor that the students trusted enough to approach in November, when their classmate began making the threats.

“Afterwards I heard from several students who said they had seen classmates with a gun in the past, but were too afraid to say anything,” Rodriguez said. “Fortunately, nothing happened here, but who knows what might have happened outside of school.”

The only way to combat the violence, she said, is to empower students.

“Most kids want to do the right thing, but they hear a lot of noise today,” Rodriguez said. “We have to become part of that noise. If we don’t, our message will get drowned out.”

Find out how you can empower students with Say Something.