Sandy Hook Promise is honored to be recognized for our award-winning programs and awareness-building campaigns. We’ve also received solid ratings from charity watch dogs and positive reviews from people like you.

Sandy Hook Promise has received a five-star rating on Great Nonprofits and is a top-rated charity. Great Nonprofits is a leading charity review website. They said this about the awards: “These are nonprofits which are rated highly by people who experience their work first hand – clients served, volunteers and donors.“

Sandy Hook Promise is proud to have received a 100 out of 100 rating from Charity Navigator for finance and accountability. Our financial reports and charity registration are available online.

Sandy Hook Promise has received a Platinum Seal of Transparency in our latest rating by GuideStar. That means we have made information available to the organization for public review. This includes information about our mission, programs and areas served, as well as our audited financial statements.

In a ceremony at FBI Headquarters, Director Christopher Wray recognized the recipients of the 2018 Director’s Community Leadership Award. These leaders, selected by their area FBI field office, have demonstrated outstanding contributions to their local communities through service. Sandy Hook Promise was among the honorees.

The Four Freedoms Awards are presented to men and women whose achievements have demonstrated a commitment to the principles that President Roosevelt proclaimed in his historic speech to Congress on Jan. 6, 1941, as essential to democracy: freedom of speech and expression, freedom of worship, freedom from want, freedom from fear. Sandy Hook Promise received the 2019 Freedom from Fear award. Learn more.

Sandy Hook Promise is proud to have received a Community Leadership Award from the CAPS/Bully Prevention Center. The Long Island nonprofit organization is dedicated to preventing bullying, cyber-bullying, child abuse, and neglect.

Women in Advocacy recognized our Vice President of Policy, Lauren Alfred Levin, for “excellence in a controversial issue campaign.” She was honored for the development of the STOP School Violence Act, which provides $1.075 billion over 10 years for school violence prevention under the Department of Justice. Learn more.

People Magazine recognized our co-founder and CEO, Nicole Hockley, as one of their 25 Women Changing the World for her work preventing gun violence. See the feature.

Each year, Sandy Hook Promise partners with BBDO New York and other recognized experts in media, storytelling and PR to produce and distribute a PSA campaign. Shared through broadcast, cable, satellite, and streaming television, as well as radio, print, digital, and outdoor ads, the campaigns reinforce the message to “know the signs” to prevent gun violence. These PSAs have won more than 200 advertising industry awards. MetrixLab research has proven that viewers of these PSAs are more aware that gun violence is preventable and of the signs that can lead to violence. Furthermore, the campaigns provided a halo effect for other gun violence prevention organizations, strengthening the movement overall.

Winner of the PR Week Purpose Award for Best Public Awareness, “The Kids Are Not Alright” campaign illustrates the “powder keg” of turmoil threatening the lives and well-being of kids. This series of three short videos reflects the anxiety, isolation, pressure, boredom, and incessant information overload that teenagers are experiencing. It is a national call to action for parents and other caring adults: learn the signs of a child in emotional distress and get help before it’s too late.

After having earned several Emmy nominations for previous PSA campaigns, Sandy Hook Promise, Smuggler Productions, and BBDO New York were honored with the prestigious Emmy Award for Outstanding Commercial of 2019 for “Back-To-School Essentials,” the short film that gives voices to students’ fears that school shootings have become the new normal. The Television Academy of Arts and Sciences selected this PSA over ads by Apple, Amazon, and P&G for the Creative Arts category.

Other awards and nominations include:

‘Point of View’ gives a different perspective on gun violence. The film portrays a typical high school election with a chilling outcome that could have been avoided if people had recognized the warning signs of a potential shooter. Read more.

The “Evan” PSA draws attention to the many signs that are often missed when someone may be at risk of hurting themselves or someone else as we follow a student who begins a new relationship at school. The PSA earned more than 150 million views and was shared widely on the Internet. It is now a core component of several Know the Signs and violence prevention training in schools and organizations nationwide. 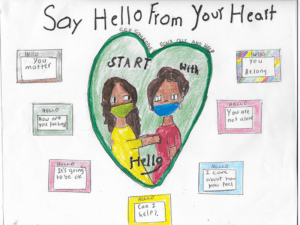 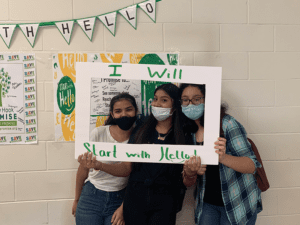