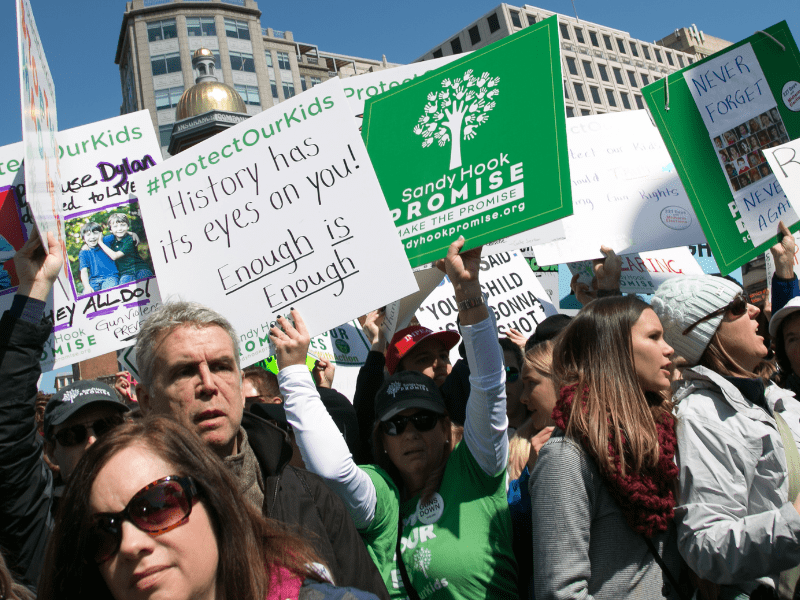 On June 24, 2022, the U.S. House joined the Senate in voting to pass the Bipartisan Safer Communities Act, a gun safety package that addresses the rising rates of gun violence nationwide. It was signed into law on June 25.

We are, as always, grateful and full of hope. Full of promise. Through our steadfast conversations with our nation’s leaders, we’re proud to have helped craft this historic package of commonsense gun safety reforms and help take it across the finish line.

By always putting protecting children first, Sandy Hook Promise has a track record of working with leaders on both sides of the aisle. With support from people like you, we have helped pass major mental health reforms, school safety laws, and other bipartisan legislation. We celebrate this incredible step — the largest of its kind in three decades — with our congressional leaders on both sides of the aisle. When we work together, we can prevent future gun violence tragedies from occurring and help save lives.

What is in the Bipartisan Safer Communities Act?

Every step toward protecting our children from gun violence is a step in the right direction. This breakthrough legislation includes:

$750 million in funding for states to implement and improve Extreme Risk Protection Order (ERPO) laws, commonly known as red flag laws, or other efforts like mental health courts, drug courts, or veterans courts. ERPO laws allow law enforcement and family members to petition a court to temporarily separate a loved one in crisis from firearms. Once they’re no longer in crisis, the court cancels the order, the firearm is returned, and a tragedy is averted.

Clarification on who needs to seek a Federal Firearms License before selling guns. This change will subject gun buyers to background checks.

An enhanced background check process for gun buyers between ages 18 and 21, which would include calls to state and local law enforcement and a search of state  juvenile records. The legislation gives federal law enforcement up to 10 days to finish the enhanced check before a dealer can hand over a gun.

A provision to keep guns out of the hands of domestic abusers. The bill would partially close the dating loophole, often called the “boyfriend loophole.” Current federal law only prohibits domestic violence abusers from buying or possessing a gun if their victim is a current or former spouse, child, co-parent, or cohabiting partner. The legislation would extend that prohibition to include people who abused their current or recent dating partners.

A federal statute prohibiting gun trafficking and straw purchases, which could give federal law enforcement and prosecutors more leeway to target the illicit trade of firearms across state lines. Currently, there isn’t a federal statute that explicitly prohibits gun trafficking or purchasing a firearm on behalf of someone else.

These measures are incredible leaps toward transformational change. We also know we will continue to lean in, and the work continues. While no single reform will end gun violence completely, we feel empowered and re-charged to continue our mission to make our schools safer and continue to save more lives. Together we can prevent gun violence.

Sixty-five Senators and the House of Representatives passed this bill, making it a historic bipartisan agreement. Congress can and will come together on commonsense, life-saving gun prevention measures when we show our advocacy, action, and support.

Please Sign Our Card to show our gratitude to Congress and encourage them to continue to protect our kids.

While this was a giant leap forward, we know there’s more work to be done to keep our children and communities safe from gun violence. Our mission and team effort relies on your relentless energy and support, engaging with your community and legislators to continue to get commonsense gun violence prevention solutions across the finish line. Let’s keep the momentum going! Here’s how you can help:

Find out more about the Sandy Hook Action Fund. Our work does not end here. Find out how you can help pass future commonsense gun reform.